Is Coronavirus Helping or Hurting the EB-5 Program?

In the most unprecedented pandemic of this era, the coronavirus has caused a dramatic shift in day-to-day life. For investors who are interested in potentially moving to the United States, the question at the top of their minds is surely how coronavirus is affecting EB-5, now as well as in the future. More importantly, many have speculated as to whether COVID-19 is helping or hurting the EB-5 program as a whole.

The answer isn’t so much one or the other but rather both. Immigration attorney Christian Triantaphyllis of Jackson Walker has seen plenty of fluctuation over the past few months.

“It’s been up and down,” Triantaphyllis says, “At first, everyone froze up on their interest in investing. I found March and April to be very slow.”

In the short term, a combination of fear and caution is what was primarily the number one deterrent that kept investors from moving forward, yet this general sentiment was short-lived.

“In May and June, there was a much bigger spike in interest with foreign investors,” Christian says. “That was due to coronavirus and people realizing their own countries were going to suffer because of it.”

“Most people are going to want to be part of a stronger nation at that time.”

Now in July and August, interest is somewhere in the middle.

“We don’t know what this is going to do to certain countries’ economies a year or two from now, especially their infrastructure and government,” Triantaphyllis says. “Most people are going to want to be part of a stronger nation at that time.”

From an attorney’s perspective, Christian Triantaphyllis can definitely see EB-5 reform happening in the near future.

“We are experiencing extreme unemployment, and EB-5 is built to combat just that…”

“We are experiencing extreme unemployment, and EB-5 is built to combat just that,” says Triantaphyllis. “I foresee congress addressing the EB-5 program to make it accessible for more investors.”

However, one concern at the top of investors’ minds is how an expansion of the EB-5 program might come to be.

“I don’t see it being addressed as immigration reform but rather through a stimulus package or jobs act,” he says. “EB-5 could be tossed in among some sort of other action that would lead to a greater package of legislation passing.”

The Future of EB-5 Due to Coronavirus

During its closure brought about by the pandemic, the USCIS EB-5 office was still accepting cases despite being temporarily closed with adjudication on hold. According to the USCIS Director, they used this period to allocate more resources on working through the backlog of applications. This should result in having reduced the waiting period, which is positive news that will also encourage investors to move forward.

“Towards the end of the year, I think we’re going to see a big pickup,” Triantaphyllis says. “It’s going to be partly due to coronavirus continuing to cause major issues in countries around the world, and people wanting to get somewhere with more solid ground in handling this kind of a disaster.”

While coronavirus initially hurt the EB-5 program, that hurt did quickly transform into an increased interest in the program. As 2020 progresses, sound reason indicates coronavirus will continue to boost interest even more. 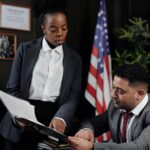